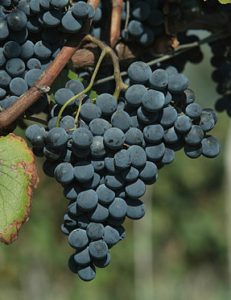 It is also grown in Armenia, Azerbaijan, Moldova, Ukraine, Uzbekistan,  and in small quantities in the Niagara and Finger Lakes regions of New York State. The Saperavi variety is one of the oldest cultivars from the region, and has consistently been the most important in Georgia’s commercial winemaking industry.
Its leaves are 3-lobed, large, and roundish. The berries are medium to large, elliptic or round depending on the type, dark bluish, and thin-skinned; with a maturation period of approximately 5 months and moderate productivity.
It is an extractive wine with a characteristic bouquet, a harmonious taste, and pleasant astringency. Its alcoholic strength ranges from 10.5-12.5% and titrated acidity 5-7%. It is known to have been in production since 1886. Saperavi grapes produce very deep red wines that are suitable for extended aging. It has the potential to produce high alcohol levels, and is often blended with lighter varieties. It is by far the most dominant Georgian red grape in terms of overall production.
Saperavi is a hardy variety, known for its ability to handle extremely cold weather and is popular for growing in high altitude and inland regions such as Kakheti. It is a teinturier grape, containing the red anthrocyanin within the grape pulp as well as the skin and is unusual in being one of very few such grapes used in single-varietal winemaking.
Saperavi reaches full ripening started from the second half of September with the harvest-time lasting to the end of October. Saperavi’s average yield per hectare amounts to 8-10 tons. Wines produced from Saperavi (Vins de Tables as well as AOC’s) are suitable for extended aging and is also used for producing naturally sweet wines and roses.
Principal micro-zones: Mukuzani, Akhasheni, Khashmi, Kindzmarauli, Napareuli, Khvareli, Kondoli.

There are no reviews yet.

Be the first to review “Saperavi 2018” Cancel reply